Zachary "Zach" Mattew Geemech is the best friend of Dill and is the deuteragonist in the series.

(look at the infobox)

Zach wears a black shirt, green (sometimes blue) pants and a purple jacket with white stripes, and black shoes. He has black shiny hair and his eyes are in the shade of purple.

Being the best friend of Dill, Zach has pretty much the same child-like behavior as he does, like tending to make jokes and puns, even when battling his enemies. He seems to look more into things before just trying to handle them, much unlike Dill. He is extremely smart, showing an above level on intelligence. He is very skilled in karate, martial arts and hand-to-hand combat, he has also picked up some intellect from his older brother Tyrone, who is a skilled mechanic and has some skill in alien technology.

Zach appears to get more agressive when his actions or not doing something about the present situation results in someone innocent getting hurt or injured.

Zach has the ability to absorb technology and then shapeshift his body to upgrade, copy or manipulate that peice of technology. These including, motorcycles, blasters, fans, giant tech fists, and more.

Zach sometimes carries various pieces of tech to absorb during a battle.

If a certain magnetic pulse is used, Zach's powers will negate and he will not be able to absorb technology. If Zach is using his Booster shoes to fly, and a small object irritates the rocket boosters, he could lose flight and fall. 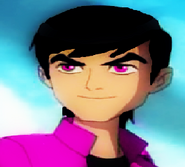 Add an image to this gallery
Retrieved from "https://ben10fanfiction.fandom.com/wiki/Zach_Geemech?oldid=900142"
Community content is available under CC-BY-SA unless otherwise noted.