Yami is a character in Pokémon Sky. She first appeared in All That Glitters, Is Bright Lights of the Derwin 13 Shorts. She is a Kirlia from the Off-the-ground.

She has long blonde hair, with the hair at the back tied up. She wears a black sleeveless shirt. She wears a red skirt and belt. She has yellow leggings.

She is very outgoing and happy. She is helpful but easily distracted. She likes making clothes with Hikari.

She has psychokinesis and general psychic powers.

She can control plants a little; it’s more of a passive thing.

Her Ability is Synchronize, which gives foes her status conditions.

She can be distracted easily, as well as manipulated. However, Hikari keeps her focused.

Yami is often forgetful of Koumori’s blindness. But most people are, considering her ability to hide it.

Yami and Hikari are incredibly affectionate to each other, often cuddling and snuggling. 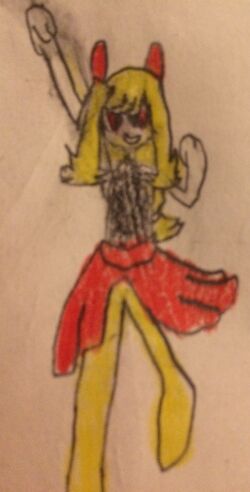