Xadim was the first villain introduced in Imad 10, being reformed later on.

Powers: Above average prowess in martial arts, good marksmanship with Laser gun, Excellent Ultimatrix wielder. Also has an army of robots at his disposal. Killer instinct more honed than his counterpart's.

Being an alternate self of Imad, Xadim looks a lot like his counterpart, albeit with blue eyes instead of brown ones, slightly darker skin and light brown curly and wavy hair instead of dark brown one. His Alien's eyes keep this blue coloration.

Xadim started out in his younger days as an exact copy of Imad; however, major events in his life pushed him towards a darker path than his counterpart's, leaving behind traditional heroic ideals and adopting a more wary, pessimistic, pragmatic and ruthless approach for the sake of what he saw as the greater good, as evidenced by his instillment of a dictatorship over Hara City, intending to weed out criminal activity more efficiently. As his friends deserted him, he lost more of his zest for life and sense of humor, having only his servant robots for company, communicating with them purely on professional terms while adopting a stoic and collected new persona. He prioritized upholding the harsh yet efficient order in his city above all else.

Upon losing to his counterpart and being exiled, Xadim felt deeply betrayed by the people he swore to protect by all means necessary, showing he meant the best for them despite his unorthodox means, deeming them as ungrateful bastards and swearing revenge on them and all who stood against him. He showed great cunning and patience by orchestrating a mostly successful plan for vengeance that took five years to be carried on, as well as good acting skills by feigning regret and sorrow, and basic knowledge in psychology, which helped him to manipulate his old friend Azmuth to further his plans. This also showed he's one to hold grudges for long if not indefinite amounts of time.

Despite this, Xadim showed deep instability underneath his collected demeanor: as his rematch with Imad went on longer and longer, he started losing patience, as well as control over himself, becoming increasingly violent and eventually uncontrollably berserk, his rage fueled by his feeling of undeserved betrayal and the shadow of his past that originally caused him to walk this dark path. In stark contrast to the calm dictator who wanted to uphold order, he became a rampaging force of nature bent on destruction. Despite all this, as shown in Chapter 3, there was still deep within him a part that sought forgiveness and wanted what's best for everyone, needing someone's acceptance and nurturing to fully bloom back.

Xadim is a parallel world version of Imad, going once by the same name. He lived in an alternate dimension very similar to the Imad's, also acquiring at a point in time an Omnitrix, using it to fight for justice. Unfortunately, during one of his heroics, an insane criminal took his best friend and girlfriend hostage, killing her right and laughing manically in front of him despite his demands being met. This triggered a potent start of darkness for the enraged Omnitrix wielder, who pondered how despite all his efforts to make the world a better place, there will still be monsters who'll ruin it and kill innocents, specifically his loved ones. He turned over a new page of his life by killing said criminal in an inhumane way, turning from a relatively idealistic and caring hero to a ruthless yet well-intentioned dictator. He seized full power over Hara City and exiled his co-ruler Jazzufa upon the latter's refusal of taking part in such a regime, with their common friends leaving the city of their own will. He changed his name to Xadim as a symbol and reminder for himself of his "rebirth" and new outlook on life. He single-highhandedly neutralized and captured Imad's friends (who had crossed into his world) upon their infiltration of his tower, mistaking them for his own ex-comrades, imprisoning them to interrogate them about what was happening. He realized later on about the true identity of his prisoners and the existence of other worlds, seemingly wanting to expand his rule above dimensions. He eventually lost to Imad who wielded an Ultimatrix (which was recently built by this dimensions' Azmuth to finish this), being exiled (as Jazzuffa took back his post as a more forgiving ruler) until he felt true remorse for his actions.

Five years have passed in his world (1 year passed in Imad's world), Xadim worked his way into Azmuth's trust and laboratory through hard work and new heroics, having convinced the Galvan abotu regretting his ol ways and seeking a 2nd chance. It was however a well-planned ruse Xadim set through five years, before stealing Azmuth's digital plans for the Omnitrix and Ultimatrix, the instruments of his vengeance against those who stood against him and exiled him, seeing them as ungrateful bastards. He built thousands of the first for his Bioids army, and one Ultimatrix for his personal use. Ruthlessly commanding his army, he conquered back his old city and other planets, but he needed Azmuth to unlock him a secret locked form. In the anticipated case he wouldn't succeed, he created a Special To'kustar DNA Strand as a secret weapon. A succession of events pitted him anew against Imad in his own dimension this time, a terriblly destrucftive battle raging between the two as well as the Bioid army, as Xadim gave in rage and lust for pure destruction. Eventually, he was defeated by Ultimate Masquerade (outside of Imad's control), as Azmuth decided to try and rehabilitate his old friend on Galvan Prime.

Few months later, He was partnered up with Imad to stop the Osmosian Varos . He revealed the details about his descent into villainy to his counterpart, who managed to talk some sense back into him. In the Core of Existence, he seemingly sacrificed his life by initiating his Ultimatrix's self-destruct mechanism to save his doppelganger and the universe, which caused an explosion he hoped was strong enough totake down Varos with him, in vain. Fortunately for him, he was healed back to health by Imad as Ultimate Masquerade, before the latter's power starting to deteriorate and killing him. Upon seeing Imad at the verge of death and hearing what they thought would be his last words, he expressed sincere regret for his deeds and deep sorrow about his twin's impeding death. Luckily for them, a mysterious female alien appeared in the core and saved Imad, taking the 2 humans back home. There, Xadim was officially pardoned by both Humans and Galvans for his deeds, giving him a chance to start of with a clean slate.

Due to his more violent MO in life, Xadim was quite proficient at hand-to-hand combat, more so than his counterpart, also being a better weapon user, especially laser guns. During his rule over Hara City, he had an army of combat robots and various war machines (Jets and Tanks) at his disposal. His greatest power was very efficient use of the various Omnitrix (and later Ultimatrix) alien forms for combat, and unlike the more pacifist Imad, he wouldn't hesitate when it comes to getting his hands dirty. His major weakness was underestimating his opponents. As a calm dictator, he didn't take Imad's threat seriously enough, thinking he would be nothing more than a wanna-be rebel to silence, not taking in account the possibility of said menace getting outside help. As a conqueror, this weakness would be exhibited mostly under the form of violent recklessness: upon becoming berserk, Xadim would let his lust for revenge and destruction cloud his rational thinking,making him more unpredictable but also more prone to errors on the battlefield.

Addressing citizens on a giant screen. 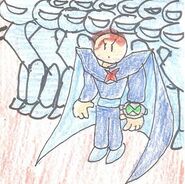 Xadim with his robot army at the ready

The rematch between Imad and Xadim 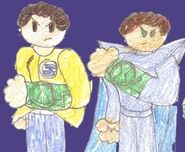 Two sworn enemies partnered up for the better and the worst

Explaining his true Past

Sacrificing himself for all to make up for his wrongdoing.

Xadim admits his mistakes and apologizes to a dying Imad.
Add an image to this gallery

Although Xadim still cherishes the memory of his old deceased girlfriend, he decided to start his love life all over again, and during one of his adventures, he met a beautiful young Anodite called Moon-Lee Endymia. Unlike a few Anodites, Moon-Lee was down to earth, ( But with some Wild Imagination) modest about her powers and loved to spread justice and happiness, and was fond of new cultures, including the humans'. After some time spent with Xadim, they both became Boyfriend and Girlfriend.

The relationship Between Xadim and Moon-Lee is described as a harmonious yet explosive combination of the Earth and Fire elements respectively.

Retrieved from "https://ben10fanfiction.fandom.com/wiki/Xadim?oldid=811439"
Community content is available under CC-BY-SA unless otherwise noted.