XLR8 (pronounced "Accelerate") is the Ultimatrix MK10's DNA sample of a Kineceleran from the planet Kinet.

XLR8 resembles a semi-armored Velociraptor. He has black wheels on his feet and wears a helmet with a visor, leaving the other features of his head unknown. Whenever the visor does come up, one can see that he has a blue face, green eyes, black lips, and stripes above and on the right side of his eyes. He wears the Omnitrix symbol on his chest. He has five blue stripes on his tail.

In The New Omniverse, 16-year-old XLR8's appearance is the same as Omniverse, but the white color on his shirt is replaced by green, which now covers whole of his neck. He has three white stripes on his tail. His suit only goes to the third stripe on his tail now. The black balls on his feet are bigger. His helmet is longer in the back and front. His claws are also longer. His visor is darker. XLR8's voice now sounds like Ben's, but in a fast talking, higher-pitched way. His suit is also a little greener. At the end of the suit on his shoulders are white. His suit now goes up to his knees, with the white at the end of it. He has a white stripe like his appearance in Ben 10,000 under his shirt, and one to the sides of it as well.

Gwen's Kinecerelean form wears a blue jumpsuit with a belt that has the Omnitrix on it. 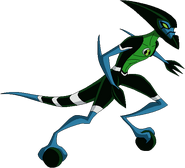 XLR8 can manipulate friction to reach speeds of 500 mph within two seconds. It is revealed that XLR8 can accelerate so quickly that time appears to completely stop to him.

XLR8 has very high dexterity, being able to type on keyboards or keypads at high speeds. Using this skill, he can input any code to deactivate devices.

XLR8 also seem to think, act and react at superhuman speed as well, as he was able to think of a million combinations in a few seconds.

XLR8 can deliver speed-enhanced attacks with rapid succession, such as excessively kicking or stabbing enemies with great speed and strength.

XLR8 is capable of creating tornadoes by generating a centripetal vacuum powerful enough to lift a To'kustar, either by running in a circular pattern or spinning at supersonic speeds.

XLR8's scissor-like claws can cut through many materials with relative ease.

XLR8 has enhanced strength, enough to carry a multitude of fishermen and Gwen across a lake to shore without slowing down, as well as to greatly damage someone like Exo-Skull with physical attacks, which are further enhanced by striking at rapid succession due to XLR8's speed.

XLR8 can recover from injuries faster than other species.

When Kevin 11 was pushed and almost fell off a cart, he used his Kineceleran tail to hang on to the wire, revealing the tail is prehensile.

XLR8 is able to cling to surfaces, either due to his claws or his agility, or a combination of the two.

XLR8's speed does not always work on all surfaces, like ice or strong adhesives, which can make it hard to control or slow him down.

It was revealed that XLR8's tail could be held down to keep him in place.

XLR8 is very hyperactive, and it can be difficult for him to stay focused, as where he got bored of looking at magic books and started reading Sumo Slammers instead.