Start a Wiki
XLR8 is the Omnitrix's DNA sample of a Kineceleran from the planet Kinet in Earth-1010.

XLR8 resembles a semi-armoured Velociraptor. He has black wheels on his feet and wears a helmet with a visor, leaving the other features of his head unknown. Whenever the visor does come up, one can see that he has a blue face, green eyes, black lips, and stripes above and on the right side of his eyes. He wears the Omnitrix symbol on his chest. He has four blue stripes on his tail.

Using the balls on his feet, XLR8 can manipulate friction to gain incredible speed in short amounts of time (sometimes as fast as 500 mph in 2 seconds). He is fast enough to run across the surface of water. His reflexes are so fast he can dodge attacks easily, providing he is ready for them.

He has incredibly high dexterity, allowing to complete human tasks in small fractions of the time. His thought power is also accelerated.

XLR8 can utilise his speed to deliver powerful rapid-fire attacks, such as excessively kicking his foe.

XLR8's scissor-like claws can cut through many materials with relative ease.

His prehensile tail is strong enough to hold his own body weight.

By running rapidly in a circle or spinning himself, XLR8 can generate powerful tornadoes via a centripetal vacuum.

His speed does not work on all surfaces, and he finds it hard to control himself on ice. He can also be trapped by strong adhesives.

His movement can be restricted greatly of his tail becomes trapped.

XLR8 was first used by Mad Ben in the Prologue to avoid an attack from Apollo.

He was first used by Ben Prime in Chapter 6 to return to Plumber HQ.

Ben Prime used Delta XLR8 in Chapter 7 to rush away and retrieve Azmuth so he could swap the two Bens' Omnitrixes.

Ben Delta used XLR8 in Ancient Alien to quickly find the entrance to the quarry. 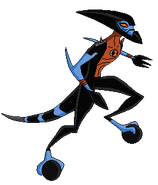 Mad XLR8 (credit to Waybig)
Add an image to this gallery

Retrieved from "https://ben10fanfiction.fandom.com/wiki/XLR8_(Earth-1010)?oldid=872169"
Community content is available under CC-BY-SA unless otherwise noted.