Wolfsbane is the Infinity's DNA sample of a Loboan from Anur Transyl's moon Luna Lobo in Bryce Bowman: Origins.

Wolfsbane's appearance is based on a werewolf. He has grey fur, a long flowing mane, and a large bushy tail, with three sharp claws on each hand and foot.

The inside of his mouth is red, like blood.

His eyes are a bright blue.

The Infinity appears on his waist, where a belt buckle would be.

Bryce's muscle fibers crawl up his arm, followed closely by blue-grey fur. The fibers pulse on his head as his ears elongate and his mouth is stretched forward into a snout with pointed teeth. He lurches forward, grabbing at his shirt with three, black claws on each hand, tearing it off so his expanding torso has room to grow. His legs crack, the bones breaking and healing into an odd z-shape, huge talons rip through his shoes, leaving massive clawed feet, with two forward toes and one backward. Wolfsbane takes two, staggered steps forward then turn his head upward and howls in sync with the Infinity's rising energy, which takes over the scene.

In the beginning of Midnight Prowl, Wolfsbane was unlocked when the Wolf scratched Humungousaur's chest. Bryce was then transformed into Wolfsbane slowly.

In Nemesis Attacks, Bryce used Wolfsbane to defeat Nemevoc, who was transformed into Diamondhead.

In Monster of the Earth, Wolfsbane was defeated by Nemevoc as Equinox.

In Darkness in the Air, Wolfsbane fought Dr. Viktor long enough for Max Tennyson to defeat him.

Wolfsbane can emit a powerful ultrasonic howl by opening his quadra-hinged muzzle. This can either cause considerable damage to his targets, reflect incoming projectiles, or propel himself upward like a rocket booster.

He has enhanced senses of smelling and hearing, as well as enhanced agility, speed, and strength. He also has extraordinary night vision.

Wolfsbane also has formidable claws and fangs. Additionally, the claws on his feet can grasp like his hands

Like most Earth canines, he can't handle loud noises, like that of giant bells, because of his sensitive hearing 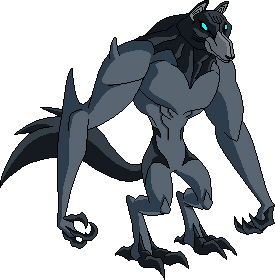 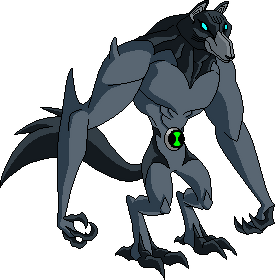 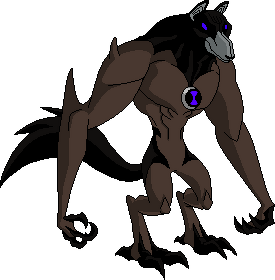