Wildvine is the Omnitrix's DNA sample of a Flourana from the planet Flors Verdance set to appear in Bryce Bowman: Devil's Bounty.

Wildvine is a humanoid plant with one eye in the middle of his face, five vine-like legs, four long fingers on his hands, flytrap-shaped flaps with teeth covering his head, and pods on his back that he can use as explosives or smoke bombs.

The Omnitrix sits on his chest.

Bryce's arm shrivels around the Omnitrix, as its slight glow intensifies. Vines, originating from the Infinity, wrap around Bryce's arm, then crawl upward spiraling over his face and closing it in. He reaches up to hold onto his head as he turns around; his arms are now totally greenish brown and lanky. Blue orbs push their way through the flesh on his shoulders. Black pods sprout on his back as his vine-wrapped head turns into what appears to be a closed Venus fly trap. The trap then tears open, revealing Wildvine's head. He twirls, then lands on his feet with his arms posed dynamically to the side.

Wildvine can grow and alter the size of his body like a real plant but also retract it again at will. He can also grow and extend his arms, legs and fingers into vine like tentacles to grab and restrain others. He is also extremely flexible due to his plant like body.

Wildvine can merge with plant life, including Earth's trees. He can also change his color in order to camouflage better. He can make body parts, notably his head, appear on the plant he merges with.

Wildvine can grow black fruit like pods on his back that contain a whole host of substances (lethal and non-lethal), allowing him to use them as explosives or smoke bombs, as mentioned above. His pods can also grow vines.

Wildvine can grow skewers on his legs to knock down enemies, as well as grow sharp thorns on his body. He is also highly agile, as he can spin in the air to disperse his fruit bombs, and throw them into the air, basically firing on his enemies.

Wildvine possesses enhanced strength, much more than you'd expect from his appearance.

Wildvine is able to regenerate his body if any part of it gets damaged.

Wildvine is immune to the effects of gases, such as a flame retardant. He also cannot be hypnotized

Wildvine's fruit pods are edible for some species, and he could theoretically offer them as a treat to calm them down.

While Wildvine as never trained himself to do so, Florauna can grow vines, thorns, fruits or flowers in many different bright colors and variations, depending on the conditions of the environment. He also has his species communication system that allows him to speak with other Florauna.

Wildvine's vines can be tangled. He can also be tangled up in his own vines.

Despite his enhanced strength, Wildvine can still have difficulty lifting certain objects with his bare hands, such as heavy weights.

Being a plant-based alien, Wildvine is vulnerable to fire and cold. 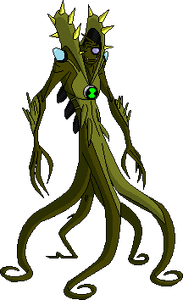 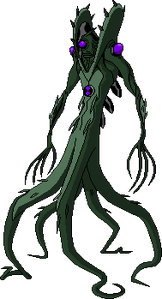