Wildpup is a alien transfromation used in the show, Brandon 10.

In The Original Series, Wildpup takes the appeareance of a small, orange dog with big green eyes and pointy eyes. He has a black stripe on his back and his chest area is a yellow-toned color. His fur is messy and sticks out and his paws are black. The Omnitrix Symbol is on his chest.

In Ultimate Hero, Wildpup appears more matured than in the Original Series. His paws are covered with fur and are no longer black while claws are visable now. Instead of appearing as a square-shape, his chest is now more curved and has a darker toned yellow which appears as a light orange. His lips are now thicker and colored black while his ears are pointing upwards towards the front rather than behind, their insides are also dark colored now. His hair is neater and his stomach is sticking outwards more. The black stripe on his back is also no longer there. The Ultimatrix Symbol is on his chest.

Due to his short size, Wildpup can be attacked easily and, possibly, easily defeated. He also isn't a strong fighter. Wildpup is incapable of speaking too, only barking which makes communicating important information difficult and often a challenge. 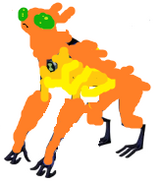 Wildpup in The Original Series 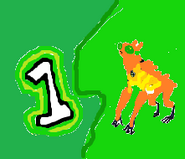 Wildpup in The Original Series Titles

Making of Wildpup (UH) 2
Add an image to this gallery
Retrieved from "https://ben10fanfiction.fandom.com/wiki/Wildpup?oldid=922268"
Community content is available under CC-BY-SA unless otherwise noted.