Wildmutt is the Omnitrix's DNA sample of a Vulpimancer from the planet Vulpin, set to appear in Bryce Bowman: Devil's Bounty.

Wildmutt appears to be a large orange canine alien with no eyes, ears, or nose.

His posture and movements are also somewhat apelike.

His teeth are very defined and stick out of his mouth. The various spines found all across his body function similarly to whiskers with tactile sensing, and are not fur.​​ Since Wildmutt has no eyes, he uses his sense of smell and hearing to navigate, which are aided by three gill-like nostrils located on each side of his neck.

Wildmutt has stripes on his back, and a long tail.

The Omnitrix rests on Wildmutt's forehead.

Bryce pulls his hand off the Omnitrix, slowly, as the light it's emanating is pulled into the dial, which sinks into his arm. While the Omnitrix disappears, Bryce's muscle fibers being engorging and crawling up his arm, with orange, fur-like spines peaking out in the creases between them. They travel up his neck and all over his face. His jaw juts out, his teeth sharpened and he roars while his close eyes are taken over by orange spines. His back cracks and stretches, he lurches forward, then his right arm, now more leg-like and covered in orange spines, cracks as well. His fingers are curled, then they quickly flick out with black claws extending from the tips. He slams his hand into the ground, then slowly rises out from behind it. Wildmutt roars while his tail flails wildly behind him and the Omnitrix glows brilliantly.

Wildmutt's main ability is his sense of smell. As he has no eyes, his "vision" is made up of a dull 3D mapping of where his senses originate, similar to a thermograph. Combined with his enhanced hearing, his senses take the form of a radar or sonar, allowing him to still perceive his environment more clearly.

Wildmutt's enhanced speed and reaction time allows him to dodge, evade, and counterattack effortlessly with the help of his senses.

Wildmutt can track almost anything and anyone by their scent.

Wildmutt has enhanced strength, as he could dig deep craters at a fast speed, even while digging through solid stone ground.

Wildmutt has enhanced agility that allows him to run, jump, and climb at an inhuman rate. He is highly acrobatic and gymnastic, with such movements being similar to that of an ape.

Wildmutt is durable enough to survive a steel tower falling on top of him and jump through a glass window.

Wildmutt is a quadruped. However, he is capable of standing on his hind legs, and he can punch, somewhat awkwardly, by doing this. In addition, his feet are prehensile.

Wildmutt possesses razor-sharp teeth and claws, the latter of which he can use to climb vertical surfaces.

Wildmutt's back supplement his sonar and can also serve as weapons, either protecting him while he's rolling or as projectiles fired off at will.

Wildmutt cannot talk in human languages. Instead, he communicates through a combination of barking and snarling. Due to this, it is extremely difficult for anyone to understand him.

Wildmutt's lack of eyes makes him completely dependent on his other senses (mainly olfactory).

Wildmutt's senses are very sensitive, making him vulnerable to anything that can overwhelm his senses, such as a high-pitched sound.

When infected with a cold, Wildmutt's nostrils (on the sides of his neck) get blocked by mucus, making him unable to smell or hear and rendering him essentially "blind." In addition, his fur discolors from its vivid orange to a pale yellowish-orange tone, and his lips and claws turn from black to a sickly dark green hue. 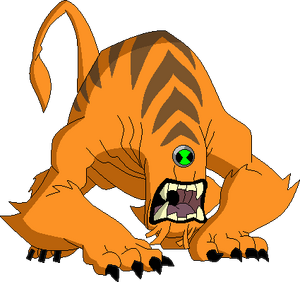 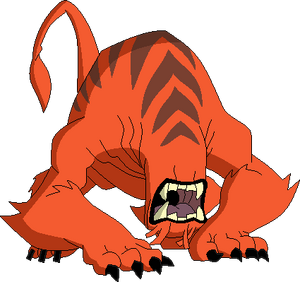