Start a Wiki
Whirlwind is an Escrocker from the planet Aimsir in Simien 10: Polyverse and Ben 10: Ruins Of Earth. This is a redone version of the original page Whirlwind.

Whirlwind is a large grey alien with a tornado for a body. He doesn't have any legs, walking around only on his tornado leg. His head is a windy sphere with two eyes and the Polytrix symbol on his forehead.

Whirlwind is basically a living tornado. He is made mostly out of rapidly spinning air. He can change his body formation in order to allow things to pass through him, despite not being able to keep it up for too long.

Whirlwind controls air, allowing him to blasts gusts of wind at his enemies, or pull them to him. He can also use this ability to create and control tornados.

Whirlwind can change his hands into mini-tornados, which can suck things into his arms. Objects will them be spinning around in his torso until he chooses to release them.

Whirlwind can increase his size, becoming stronger and faster as he grows, although he is much more unstable while bigger.

Whirlwind's amorphous body is not reflexively used and can strain him if used too much.

Additionally, due to Whirlwind basically being made out of wind, he is very light and can be thrown around with ease.

Whirlwind's original appearance. His color is lighter, he is smaller and his tornado funnel is shaped differently. 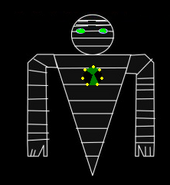 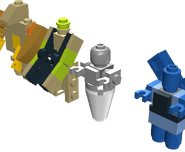 Whirlwind in Simien's Alien Hex.
Add an image to this gallery
----
Retrieved from "https://ben10fanfiction.fandom.com/wiki/Whirlwind?oldid=867054"
Community content is available under CC-BY-SA unless otherwise noted.