Waylighter is an alien in the Sem 10 franchise, and appears in other series as well.

Waylighter has a humanoid figure, and his whole body is burning. It is unknown what is under that fire. His Ultimatrix symbol is on his chest.

In Omniverse, Waylighter has green bands around his wrists, and 2 green sashes around his torso, making an X shape. His Omnitrix symbol is at the center of the shape. It was later revealed that underneath the fire on his body, he is made out of a black, goo-like substance. In this form, the Omnitrix symbol is on his chest.

Waylighter can fly, and use his pyrokinesis. He can also rub his hands to create a powerful enough energy to make magma. He also has super strength.

Without his fire, Waylighter's strength increases greatly, but he loses all of his other powers.

Waylighter is weak to water, and if exposed to too much of it, the fire on his body will disappear. He is also weak to ice.

He is a playable hero in the game. He glows in his art for this game.﻿

In 3.10, Waylighter wears two blue sashes going along his chest, and two blue cuffs with a black stripe on them. He first returns in What's Left, where he explores what's left of Earth, and sets his sights on a parking lot. There, he is attacked by a mysterious blue Pyronite. Waylighter tries to fight him, but the Pyronite was stronger. He appeared in Noah-Sem 3: Destruction of The Multiverse where he fought a Chronian. He also appears in "Body of Lies" to fight Cawber. He appears in "Too Many Snakes" to fight the Snake clones and goes Amazing to fight the Crystal Keeper. He then appears in "Heaven,Part 2" to fight a mob of Orishans and uses his true form for the first time. 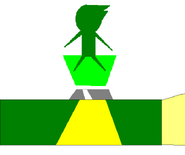 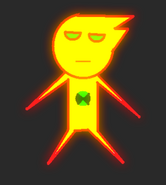 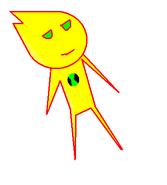 Waylighter in The Patchwork
Community content is available under CC-BY-SA unless otherwise noted.
Advertisement