Waterflush is an alien in the Sem 10 franchise.

Waterflush, being made of water, can shapeshift, and absorb water to grow. He can also shoot his own water.

To much heat can make him dry up. If he is completely gone, Sem will transform back.

He appears in Of Metal and Flames to fight Pyronites. He appears in Noah 10-Sem 2.10: Clones Attack to battle Alshedo. He returns in Evolution of the Spiritual where he fights Fay'Are.

In 3.10: The Last Generation, Waterflush now has a yellow trix and eyes. He appears in Earth is Dead, Part 1, where he defeats a Vulpimancer.

He will appear in Brian 10. Although, it is unknown when.

Waterflush is a confirmed alien in Ben 10: . He currently has no techological form. 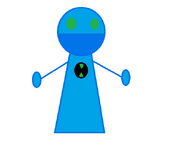 Waterflush transformation (With Sem).
Add an image to this gallery

Retrieved from "https://ben10fanfiction.fandom.com/wiki/Waterflush?oldid=775978"
Community content is available under CC-BY-SA unless otherwise noted.