Water Hazard is the Infinity's DNA sample of an Orishan from Kiusana in the Andromeda Galaxy in Bryce Bowman: Origins.

His eyes are light-blue, and his mouth does not move when he speaks.

Behind his legs and on the top of his arms are small spikes that are grey.

On his shoulders and legs, there are black spots. On his hands there are port holes, which he uses to shoot water. Water Hazard has four fingers with claws on them and on each one of his feet, there is a grey spike. His lower torso is grey, with two spikes on the side of them.

The Infinity glows as red armor plates grow from Bryce's arm. It turns to his back where a red, armored hood tears through his shirt and covers his head. Water Hazard's fingers crack and then he spins once, while the camera pans backward. Water Hazard poses with his arms forward ready to fire.

In Hunted (BBO), Water Hazard appeared to save a little girl from a burning building. Later he fought the bounty hunters, Tetrax, Sixsix, and Kraab.

In Framed, Kevin used Water Hazard to slow his fall in a fight against Everglade, then tried to injure him, but it failed.

In Nemesis Attacks, Bryce uses Water Hazard to fight Kraab, but quickly shifts to Upgrade to finish the job.

In Prisoners for Fun, Water Hazard combined his water blasts with Kevin's fire to create a powerful steam attack to knock out Technorg.

Water Hazard has an armored exoskeleton which protects his body from damage, including radiation.

He has enhanced strength.

He also has a retractable visor hidden within his hood.

Water Hazard can absorb moisture, including from the air, through the portholes in his hands. He can also launch pressurized water blasts from these same holes. This water can range from ice cold to boiling hot.

Water Hazard can launch himself upward with his water blasts and can slash the water as it shoots out to make a kind of whip.

Although Water Hazard's armored exoskeleton allows him to feel little to no physical pain, he seems to be vulnerable to energy attacks. 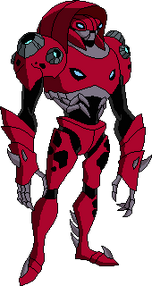 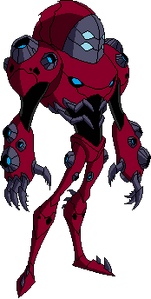 Water Hazard with his mask 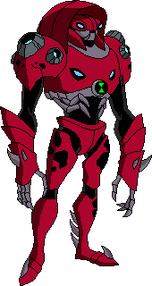 Water Hazard in Devil's Bounty
Add an image to this gallery

Retrieved from "https://ben10fanfiction.fandom.com/wiki/Water_Hazard_(Earth-90)?oldid=886465"
Community content is available under CC-BY-SA unless otherwise noted.