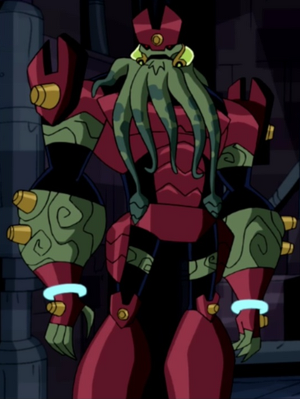 Vilgax is a recurring character in Ben 10: Inversed Roles. He is a Chimera Sui Generis from the planet Vilgaxia.

Vilgax is the ruler of 10 worlds, which were generously handed down to him for the greater good, so he could protect them. However, Ben and Psyphon eventually destroyed all the worlds, and Vilgax swore vengeance. He has since been part of the Shattered.

Vilgax appears as a humanoid squid with a lot of wrinkles. He wears red armor, with a red crown and a yellow bolt in the middle that resembles his shoulderpads. He wears two red gloves and a blue glowstick-bracelet on each hand. He also wears black elbow pads and knee pads. Along with this, he wears red boots and pants made of metal.

Retrieved from "https://ben10fanfiction.fandom.com/wiki/Vilgax_(Dimension_78)?oldid=850719"
Community content is available under CC-BY-SA unless otherwise noted.