Vesuviusapiens are Geothermite's species. They live on the planet Chione.

They resemble squat humanoids with rocky skin. There is a bulbous growth of magma on both forearms, upper arms, and one on their forehead. These bulges run down their spines as well, though the exact number of bulges on their backs can vary. Cracks of magma run can be seen running across their body. They have no neck.

Vesuviusapiens are made of rock encasing vital internal magma. Their important organs are powered by the thermal energy generated by this magma, so if it ever cools too much they will die.

They have very little sexual dimorphism.

Their diet consists of minerals and fuels that help keep their internal heat and magma sustainable.

A Vesuviusapien's main asset is their ability to generate and detonate rocks and minerals in their hands. They achieve this by channelling their internal magma into their hands, and cooling it in such a way that it becomes highly volatile. They also have great skill in manipulating rocks and the ground around them.

They have the ability to generate and manipulate streams of lava. They can generate these either internally and expel them, or by heating up and melting nearby minerals.

As an extension of their magma manipulation, they possess a very limited degree of pyrokinesis. This ability extends about as far as starting fires and not much further.

They are completely immune to fire-based attacks and highly resistant to any feasible kind of cryokinetic attack short of absolute zero.

Although highly resistant to external ice-based attacks, if their internal magma was somehow frozen they would die.

Although as hot as magma, the bulbous points on their head and arms are technically their most vulnerable areas.

Vesuviusapiens are vulnerable to being submerged. Doing so can cause the external-most layers of their internal magma to freeze. Although this alone is not deadly to them, it can paralyse them and cause them to drown. The reason for this is that they cannot breathe underwater and would therefore be weak enough to allow themselves to be frozen.

Vesuviusapiens are a free use species. Feel free to use them in your own series. 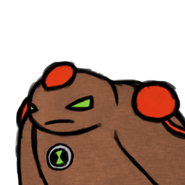