Vertebrain is a humanoid insect with four legs and four arms. His head appears like a skull, and random parts of skeleton are strewn across his body acting as an artificial exoskeleton. He has dark skin, contrasted by the bright bone covering him. Vertebrain's eyes are green, and the Omnitrix symbol is on his chest.

Vertebrain has incredibly fine motor skills, allowing him to manipulate objects to frighteningly exact degrees. This combined with his enhanced intellect gives him amazing construction skills, particularly on small-scale constructions such as robots, statues, traps, etc. His intelligence is nowhere near the best of the aliens in the Omnitrix, but it still puts humans to shame.

Vertebrain possesses the ability to detect when a creature dies nearby. He can also detect incoming threats or dangers.

Vertebrain possesses the unique ability to improve his exoskeleton by adding any bones he may find. Unlike most trix-based transformations, these improvements carry over to the next time the alien is used. This can greatly improve his durability.

Vertebrain's 'hands' are highly adhesive, in a similar way to an insect's foot. In essence this allows each hand to grip objects, even though it only possesses a single digit. This adhesive can be controlled at will, naturally, to let go of things.

The body beneath his bone exoskeleton is very weak and vulnerable.

Vertebrain possesses next to no fighting skills, and is near useless in hand-to-hand combat.

Vertebrain is one of the ten aliens Ben received with the T2 Omnitrix. He was first used in In The Shadow Of Vilgax when Ozai forced Ben to mistransform while trapped inside a prison van on Vilgaxia. His appearance scared the guard into opening the door while he snuck out by climbing on the ceiling.

In Dead London he was used twice. The first time was to attempt to communicate with some native Cranvius Sapience, the second was to help Ben navigate the tomb. He was used again in Life On Mars to try and assess whether the pilots of Faratin Colony Sigma had survived, using this alien's fine motor skills to carefully move crumpled pieces of metal out of the way. He discovered that the colony did not reside in the damaged head and was safe, then Sigma told him to pursue Brave New World. 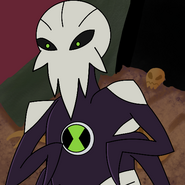