Start a Wiki
Alright so some of you may be wondering why I pushed so hard for Heatblast fest. Of all the aliens I could choose from, why Heatblast? He's good, yeah, but he isn't my favourite alien. Well, this is why. 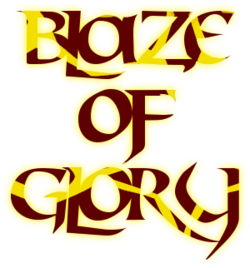 A new series written by Ultra3000 and co-written by Aaronbill3, featuring a logo by CaT!

Fire rains from the sky over a distant world. From the wreckage a single Pyronite is found, but when he wakes up he finds himself in unwelcome company.

Unable to remember his past, he becomes enslaved into a gladiatorial arena. Dubbed 'Fireborn' by his fellow warriors, he must fight for his right to live against powerful opponents. New friends and foes await him as his prowess as a warrior draws more and more attention.

I don't really know what to say about this series at the moment. It surely won't be out for a while but we agreed to push for an announcement this alien fest. So for now I'll just present some more characters.

A unique T'zun Army with an iron oxide impurity, giving him a sickly blood-red colouration. He is the ruler of the planet Nemuina that Fireborn finds himself imprisoned on. Tidas's army of T'zun Army, Erodinians, and Vesuviusapiens makes him a very powerful enemy.

A purple Galvanic Mechamorph with a sour taste for technology. Rainox is Fireborn's cellmate, and first friendly face.

These are just two but I don't want to give away too much at this stage. This story does not relate to the canon Ben 10 story, but does use the mythos quite heavily.

Retrieved from "https://ben10fanfiction.fandom.com/wiki/User_blog:Aaronbill3/Blaze_of_Glory_-_Series_Announcement!?oldid=797344"
Community content is available under CC-BY-SA unless otherwise noted.