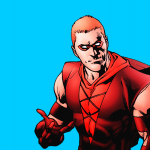 Hey BTFF, my name is The Tammar, you can call me Tammar or Nightwing or whatever. I joined BTFF on December 18, 2012 on another account and I switched to this one in June 2013.

Earth-101- My only project that didn't get cancelled. It started out as a mini-series and what was supposed to end there, but I got an idea to make it so much more. Unfortunately I had to end the second series short with a movie, and the main series is on an extended hiatus. I have an episode or two written, but I don't wanna publish them yet. It'll be back... eventually.

I'll update this later with my other stuff.

Retrieved from "https://ben10fanfiction.fandom.com/wiki/User:The_Tammar?oldid=813467"
Community content is available under CC-BY-SA unless otherwise noted.