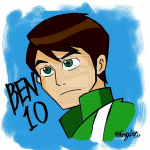 Drake
Doofus
Dweeb
Most Powerful Being in the Universe

Ben 10: Galactic Legends is my series, check it out!

There is a world, with regular people like you and me. However, among that universe there are aliens, threats, and villains galore. At age 10, Drake found the Omnitrix, as it crashed upon a campsite he visited with his Grandfather and annoying cousin. With it, he swore to become the greatest hero there ever was. With countless enemies and the stress of being a hero, he took off the Omnitrix at some point during his childhood. Only his grandfather, cousin, and a few other individuals knew about his former career as a superhero. When a new threat approached the universe, Drake had to make a decision: Put back on the most powerful device in the universe and forget about ever being normal, or stick to being who he once was. With good intentions and motivation, Drake equipped the device once more, and began stopping evil and he still does save the universe to this day.

Drake possesses the Omnitrix, full of a unknown amount of super-powered alien creatures he uses to save the day.

He took a self-defense class during his childhood, and has perfected them ever since. Being trained by the Plumber Academy and his cousin, he has mastered his talent in hand-to-hand combat.

Drake's intellect is above average, despite how he acts, sometimes.

Being a former member of the football, basketball, and track team, Drake has exceptional athletic ability and can preform expertise jumps and evasion moves.

There are still countless other lifeforms in the Omnitrix that Drake hasn't yet unlocked and used. This means that he could potentially unlock a new one and either misuse it's powers or not know how to use the powers at all. In this situation, Drake would have to adapt quickly and think fast.

Drake, even though he's more mature, still occasionally thinks before acting and doesn't particularly follow procedures and basic guidelines. However, he still does save the day and finish the job in his own unique way, right or wrong.

You could arguably say that Drake's biggest flaw is that he depends solely upon the Omnitrix. Even more so, he can only hold his own against certain enemies without powers for so long. Despite all this, Drake has proven capable of defeating enemies and solving problems while still a human. 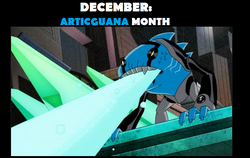 Retrieved from "https://ben10fanfiction.fandom.com/wiki/User:ScareWolf?oldid=827218"
Community content is available under CC-BY-SA unless otherwise noted.