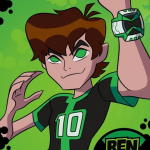 I also plan on making a special episode where Ben and Rex team up and accidentally switch powers while trying to stop Van Kleiss from conquering multiple crosstimes and alternate universes. I call it Generator Ben and Rex 10: Heroes Re-united.