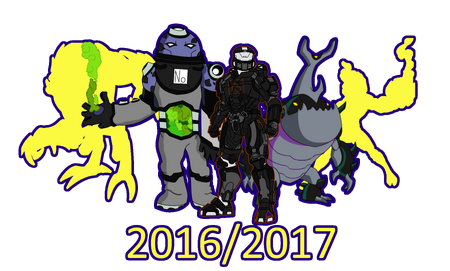 Radioactive Brigade is an upcoming miniseries/spin-off of my main series, Mack 10. It features a group called the 'Radioactive Brigade' as the main cast, which includes Polonium, Nobelium, Plutonium, and two other aliens currently unintroduced. It also has a guest and recurring star of Plasma, the main villain of Mack 10. As previously revealed, the show will have a dark but humurous tone. The series will have roughly seven episodes that will conclude by the end of the first season of Mack 10. Over the seven episodes, origins and meetings will be revealed for the five members of the group, leading up to a two-part climax finale. Stay tuned for more revealed information for the upcoming miniseries, RADIOACTIVE BRIGADE. :)

Retrieved from "https://ben10fanfiction.fandom.com/wiki/User:PokeRob/Fanon_Con/Radioactive_Brigade?oldid=692838"
Community content is available under CC-BY-SA unless otherwise noted.