DISCLAIMER: THIS USER HAS MOVED TO A NEW ACCOUNT.

Hello! My name is Monitor071. You may call me Monny, Mon, Monitor, Shades, or 071 Mister Monitor if you want to do so.

I joined on April 21, 2014 as Shades of the sun, right after being blocked on BTP because of not noticing something (I was a noob). When I joined and started editing, I was a spammer. I was completely a noob to BTFF and I never bothered to read the rules. When I was warned, I misunderstood it and eventually I was banned on June 12, if I remember correctly. I was banned for three days, and I learned. I returned and after about half a month, I abandoned Shades of the Sun and I became Almighty Tallest Shades. I began to "degrade", and eventually I changed my name to ATS 7171, a mistake I made when I became re-obsessed with Microsoft's Halo franchise. My writing began becoming more random, after I worked on Ben 10: Unbound. I was eventually fired, I deserved it, and I realized that I needed to leave as I was a complete jerk during that time. And here I am now, now known as Monitor071.

My behavior is usually influenced by media, but that shouldn't be, as media is often deceiving and it causes more harm than good. The first "phase" I went through was during November 2014-January 2015, was heavily focused on Halo-related material. I changed my avatar and name to fit the image of a "Forerunner Monitor". Hence, this is how my current username is "Monitor071". It is possible that I may be going through a mini-"phase", a Fallout phase, however, this hasn't really effected my behavior at all, only my avatar. 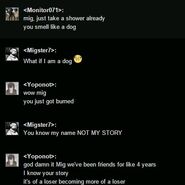 Add an image to this gallery
Retrieved from "https://ben10fanfiction.fandom.com/wiki/User:Monitor071?oldid=783296"
Community content is available under CC-BY-SA unless otherwise noted.