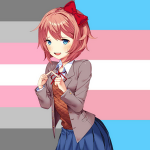 Hi! I'm Hannah, I'm really into Japanese TV, DDLC and Smash Bros. I used to be into Ben 10 a lot more but I still kinda love it.

I personally identify as non-binary, a demi-girl, so please try to alternate with she/her and they/them pronouns with me ^w^

I spend my free time writing but never finishing any projects and being (probably) gay.

Nice to meet you all!

Also please may the three-ish people who know who I am keep that to themselves, I don't like people knowing.

Retrieved from "https://ben10fanfiction.fandom.com/wiki/User:HannahChanbara?oldid=873787"
Community content is available under CC-BY-SA unless otherwise noted.