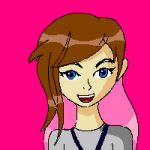 here or just D2D for short form, and you can also call me Dreamer too. I have been a fan of the Ben 10 franchise since it was aired when I was 10 myself, it has inspired my creativity with sci-fi going from fandom to original idea. since this is a fanfiction based group I will be making things fan-based here.

My most recently Idea is "Get Animated" it's based on me and my sister for main characters for I love her dearly, probably going to be my only one since I tend to half work things, by losing interest or just slips my mind, so don't expect too much from me.

I have many ideas on Ben 10, including one of my makings for Dimension 0 if it exists already then I don't care for mine is different, Ben 10 with a living Omnitrix, not just a watch but something cross between Unitrix and the Omnitrix and sort like a tale of Pinocchio to it but that just a concept idea at the moment, "Ben 10; Future Frontier" self-explained title but it mostly follows Kenny and friends, and many other one-shot ideas for fun including a Generator Rex idea but mostly for the crossover really. for some of my OCs, there will be spin-offs for them at some point that takes part with the main timeline(might have worded that wrong but don't care).

I am remaking Ben 10 in my vision more or less and anybody wanting to help can, it will be long, it will be fun, and it will be a spin on the entire series (including the reboot, movies, and games), it will be posted here, DA, and Wattpad.

A list of other things I am working on.

Input is always welcomed, you have ideas, I want to hear them.

Thank you for reading this.

P.S. if you have questions ask in a comment somewhere anywhere that I gave if you can that is.

Retrieved from "https://ben10fanfiction.fandom.com/wiki/User:Dreamer2Dusk?oldid=879518"
Community content is available under CC-BY-SA unless otherwise noted.