Upvine is a fusion between Upgrade and Wildvine and forms part of the Biomnitrix Unleashed project. Remake by Rizegreymon22 from Deviantart.

Has Upgrade's appearance but with a more organic look and the interior of his body is the same color of Wildvine's, is covered by several vines that form the circuits and like Upgrade's circuits, some parts of the vines are black when entering the green areas of his body, has Wildvine's eye, horn and vine-like legs. Wears Wildvine's belt with the Biomnitrix symbol on it. 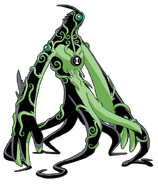 Original Upvine from DNA Lab
Add an image to this gallery
Retrieved from "https://ben10fanfiction.fandom.com/wiki/Upvine?oldid=866970"
Community content is available under CC-BY-SA unless otherwise noted.