Upgrade is the Infinity's DNA sample of a Galvanic Mechamorph from Galvan Prime's moon Galvan B in Bryce Bowman: Origins.

Upgrade has a black exterior with green stripes that resemble circuitry all over him. The green circle on his head is his eye, which glows whenever he talks.

Green circuitry runs from the Infinity up Bryce's arm. The circuits progress through his eyes, merging them into one circular green eye which releases a blast of green light. Upgrade spins around rapidly, then poses with his arms flexed down by his side.

Upgrade was unlocked at the end of Secrets: Part 2 when Azmuth unlocked the second playlist for the Infinity.

In Depression, Upgrade was used to remove Rojo's armor and defeat her.

In Under Wraps, Upgrade briefly merged with Vulkanus's armor to disable it.

In Nemesis Attacks, Upgrade merged with Kraab, trying to take over his suit but failed when Kraab grabbed him and tossed him off.

In Prisoners for Fun, Upgrade merged with Slix Vigma to help all of the prisoners escape, though Slix wasn't as easy to control and tries to continue the hyperspace launch and get him off.

In Protoform, Upgrade merged with Proto to take him down, but is once again thrown off.

Upgrade is not completely solid. Due to this, he can reshape himself to let projectiles or blows pass through him by creating a hole in his body at will.

Upgrade can use his internal nanotechnology to merge with or control any technology within reach by spreading over it. The size of the device is not significant, and he controls it as naturally as he would his own body. When he merges he upgrades the technology, hence his name.

Upgrade can reconfigure technology to suit for any situation, like transform a vehicle into a battle armor with an arsenal of heavy plasma weapons

Occasionally he can merge with organic beings, as long as there is machinery integrated within them.

Upgrade has displayed the ability to launch a powerful green plasma blast from his eye.

Upgrade has the capability to travel through electrical currents. He can also phase through most any metal or technology.

Upgrade can gently descend through the air, similar to a parachute.

Being inorganic, Upgrade is also able to survive in the vacuum of space.

Upgrade can disable technology he has been merged with by jumping off of it, although this will not happen unless he wants it to.

Upgrade is weak against electricity (being living metal).

Upgrade is sensitive to electromagnetic pulse/fields and magnetic fields.

Upgrade can be hurt if he is pulled long and hard enough.

According to Derrick J. Wyatt, Upgrade can be affected by technorganic viruses.

When Upgrade is attached to technology while it is damaged, he will be harmed as well. 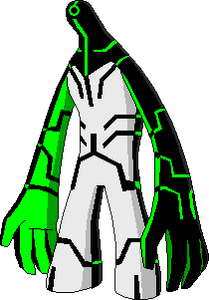 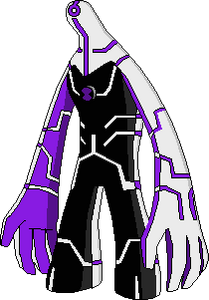 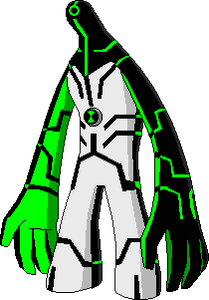