Upgrade is the Omnitrix's 1.5 DNA sample of a Galvanic Mechamorph from Galvan B in Ben 10: Omnitrix Unlimited. He is the Dimension 1 equivalent of Upgrade.

Before the Omnitrix's 1.5 recalibration in Ben 10: Across the 23rd Dimension, Upgrade had his Omniverse appearance.

Upgrade has his Ultimate Alien appearance. 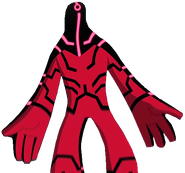 Upgrade under the microscope
Community content is available under CC-BY-SA unless otherwise noted.
Advertisement