Upgrade is the Omnitrix's DNA sample of a Galvanic Mechamorph from the moon Galvan B in Earth-1010.

His evolved form is Ultimate Upgrade.

Upgrade is a shapeshifting humanoid made of black liquid metal with green wire patterns running across his body. His stomach and under his arms and legs are green. Any wires that cross onto the green portions of his body become black as they do. His eye is a green circle in the middle of his head.

For Ben Prime, the Omnitrix symbol appears inside his circular eye.

For Ultimate Ben 10 (and most other trix wielders) the Ultimatrix symbol appears on his chest.

In the Delta Dimension, Upgrade is purple with more circular circuit patterns on his body.

Upgrade's main power is his ability to meld his body over and into technology, and use his internal nanomachines to take control of it. He can then, as his name suggests, upgrade the technology further: Usually either improving it's abilities or changing how they work. Sometime he can even add functions and components to the technology he upgrades. These changes are temporary, however, and disappear when Upgrade leaves the device. He can use his abilities to help construct devices with ease. This ability also gives him the ability to practically phase through most metals or machines.

If a device is small enough, he can upgrade it without fully merging his body with the device.

He can fire powerful green energy beams from his eye.

Being made of liquid metal, he can regenerate himself to a limited degree.

Delta Upgrade possesses a more refined ability to upgrade nanotechnology and other high-level machines. This means that he can upgrade the Omnitrix, for example.

Upgrade is vulnerable to electric attacks, as he is made of liquid metal.

He is highly vulnerable to electromagnetic fields, which disrupt his structure akin to knocking him out.

He is also vulnerable to fire attacks, as they can melt him and mess with his ability to shapeshift or hold his form. He can defend himself from this weakness by hiding inside possessed technology.

Upgrade was used briefly by Ultimate Ben 10 before going Ultimate to defeat Ro-pollo. He used Upgrade again in Chapter 17 to hijack an announcement system.

Delta Ben 10'000 used Upgrade twice in Ten Over Ten Thousand. The first time he upgraded Ben's phone to lead young Ben and Gwen back to the Rustbucket. He later used Upgrade again to recharge Ben's Omnitrix.

He was later used by Ben Delta to upgrade Blukic and Driba's Dimension Hopper in Chapter 4, however he accidentally activated it and sent himself back to the Delta Dimension. 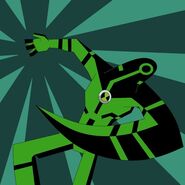 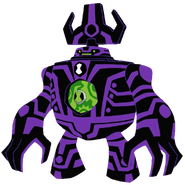 Clockwork merged with Delta Upgrade
Add an image to this gallery

Retrieved from "https://ben10fanfiction.fandom.com/wiki/Upgrade_(Earth-1010)?oldid=872175"
Community content is available under CC-BY-SA unless otherwise noted.