Upgrade was created by the Galvans. He can merge onto anything and take it under his control. He is a Galvanic Mechamorph from Galvan B.

In Noah 10, he has an Ultimate form: Ultimate Upgrade.

He looks the same as original Upgrade, but with a green stomach instead of white. He is Noah's favorite alien.

In Ben 10: Alien Universe, Upgrade appears in the series finale where he is unlocked thanks to a DNAlien who has gotten control of sanity and revealed that an ID mask should return the Omnitrix to him.

Upgrade is a character, though he can still be used by Ben. He can evolve to his techonnological form too.

Upgrade's species is the main culprit in the episodes "City of Trash" and "Quake of 3000."

In Thorn 10, Upgrade looks like how it did in Ultimate Alien, except that it's chest is bigger and all the green parts are blood red.

Upgrade X is a "Evolution" of Upgrade, utilized with the Omnitrix X Core in Will 10 X. Upgrade X, can pretty much do What Upgrade Rex can do, plus what Regular Upgrade can do.

Tommy's version of Upgrade is OS style. He was unlocked in Time to Upgrade. 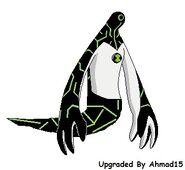 Upgrade in the original series 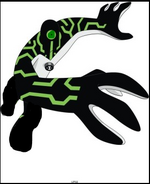 Upgrade X
Add an image to this gallery
Retrieved from "https://ben10fanfiction.fandom.com/wiki/Upgrade?oldid=202477"
Community content is available under CC-BY-SA unless otherwise noted.