Upchuck is the Omnitrix's 1.5 DNA samples of the Perk and Murk races of Gourmand from the destoyed Peptos XI and currently Peptos XII in Ben 10: Omnitrix Unlimited. They are the Dimension 1 equivalents of Upchuck.

Before the Omnitrix's 1.5 recalibration in Ben 10: Across the 23rd Dimension, Perk Upcuck had his Omniverse appearance.

Before the Omnitrix's 1.5 recalibration in Ben 10: Across the 23rd Dimension, Murk Upchuck had his Heroes United appearance.

Negative Murk Upchuck has Murk Upchuck's Heroes United appearance, but his color scheme on his back, arms, legs, top of his head and tail is inverted, while his face and torso have a paler color scheme. 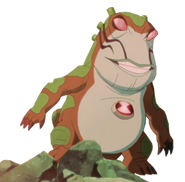 Same as their canon equivalents.

Same as their canon equivalents.