Unlimited AmpFibian has the body of a Jellyfish. He has a segmented head split into two parts. The top half is pink and slightly transluscent, and also holds the brain inside of it. The lower half is a light blue that has Unlimited AmpFibian's eyes. Connected to it's chin, there are four sensory tentacles. It then has a long, stem-like body with a blue triagle in the middle. In the middle of that triangle is the Omnitrix symbol. It has four normal tentacles on it's bottom instead of arms or legs.

He is scheduled to appear in Inversed Roles Rebooted.

He is scheduled to appear in Mack 10. 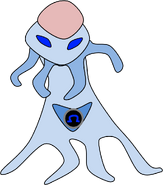 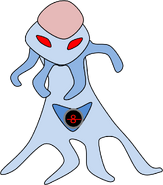 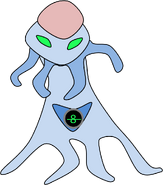 Add an image to this gallery
Retrieved from "https://ben10fanfiction.fandom.com/wiki/Unlimited_AmpFibian?oldid=767530"
Community content is available under CC-BY-SA unless otherwise noted.