Unitaur is a humanoid unicorn with a pink and black horn and pink hair. He has a large wheel where his legs are supposed to be. He has medieval shoulder paddings and gauntlets. Unitaur has a blue and black color scheme.

The Atomnitrix symbol is located on his chest.

Due to his wheel leg, Unitaur can go very fast.

Unitaur can shoot energy orb projectiles at his opponents, using his sharp horn.

His sharp horn can also cause great damage if he goes fast enough.

Unitaur wears Medieval armor, so he can take hits better.

Muddy terrains and sticky substances can hold him back. 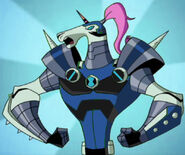 Unitaur (Dill) Official
Add an image to this gallery
Retrieved from "https://ben10fanfiction.fandom.com/wiki/Unitaur_(Dill)?oldid=866942"
Community content is available under CC-BY-SA unless otherwise noted.