The Ultimate Omnimatrix, often reffered to as the Ultimatrix, is an Omnitrix, specifically designed for Ben Tennyson in B23UA.

The Ultimatrix is a small black gauntlet, with a blue top half. The dial is a bright gold, which is paired with a light-blue hourglass symbol and DNA tubing on the sides. 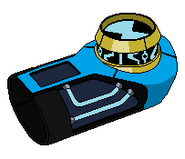 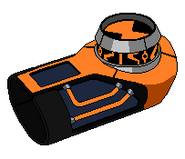 By Lego
Add an image to this gallery

Retrieved from "https://ben10fanfiction.fandom.com/wiki/Ultimatrix_(Earth-90/Dimension_23:_Two)?oldid=818381"
Community content is available under CC-BY-SA unless otherwise noted.