Ultimate Way Big is now larger than his unevolved form, with his flesh now black and red.

Ultimate Way Big gains a new power, Spacial Deletion, born from his cosmic powers. He can now manifest his cosmic powers in his hands. Anything that touches his palms while this power is active will be annihilated, stripped from reality like a block of paper against a super-powered belt sander.

Ultimate Way Big can project his cosmic power in the form of destructive waves, however these rays are no where near as strong or concentrated.

Ultimate Way Big is stronger and tougher than his previous form, mostly due to his increased size.

His new increased size makes him nearly unusable inside cities.

The fin atop his head is a weak spot and if it is struck he may be rendered unconscious. This weakness is counteracted by how difficult it would actually be to get high enough to hit that fin.

Ultimate Way Big is a free use alien, feel free to use him in your own series. 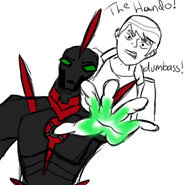