Ultimate Snow Bear is an evolved transformation in Brandon 10.

Ultimate Snow Bear is a big humanoid with grey fur and dark grey/purple-like skin. His fur goes upwards on his head and he has a beard. He has two teeth which stick out upwards from his mouth. There are two black stripes that form a V shape on his front which connect that his chest. He seems to have four white chest plates. The spiked Ultimatrix symbol is on his chest.

Ultimate Snow Bear has the ability to fire an ice beam from his mouth and to freeze things with a super freeze touch from his Ice Hands. Just like his predecessor, he can camouflage in with surrounding elements like snow and ice. He is now much bigger and stronger than Snow Bear which makes him able to engage in hand-to-hand combat with average sized and big sized enemies as well as pick up, carry and move objects. He is also immune to extreme cold temperatures.

Ultimate Snow Bear's only known weakness at the moment is high temperatures and flames.

In Meet the Parents, Ultimate Snow Bear fights against Pursgain

In Renegade, Ultimate Snow Bear puts out a fire and saves a trapped citizen 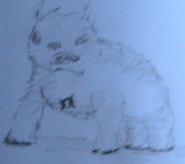 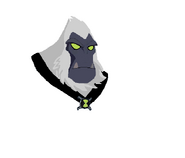