Ultimate Ghostfreak's appearance is of a big red genie. He has a sash around his waist, his lower body being a genie tail. His upper body is extremely muscular. He has a ponytail on his head, and sharp nails. He has four eyes.

When used by Intellectuary, his right eyes are closed.

Ultimate Ghostfreak is much stronger than Ghostfreak. He can fly, and release energy from his body, in the form of energy blasts, beams, and he can release it from his entire body. He has super speed, able to match Luffy's speed, and super durability.

Ultimate Ghostfreak has seemingly lost the ability to turn intangible, as he wasn't able to hit an intangible Ultimate Big Chill.

Ultimate Ghostfreak is only used by Albedo. 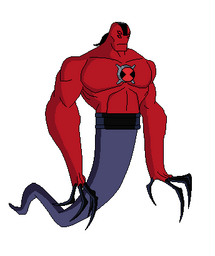