Ultimate Astro is an alien transformation in Brandon 10.

Ultimate Astro is a light and slightly dark blue humanoid composed of energy which makes him slightly transparent sometimes. His head resembles a flare of a fire which a very light blue outline and a bright, nearly white inside. His eyes are big and circular similar to devolved form, Astro, however his mouth is shorter and resembles a small, white bar. He now has a neck which is the same color and material as his head. His neck leads to a blue collar connected to an armored torso and lower stomach section similar to his devolved form however missing armored arms and legs. There are now two green, circular vents built into the area under his chest section of the armor and a black stripe running down the middle of his stomach section. His arms are completely blue but close to a type of cyan with patches of dark blue. His legs are similar except the colors are reversed being mainly dark blue with patches of cyan/blue; his legs also have a lack of feet and end with a some what pointy tip. The Ultimatrix Symbol is on his chest.

Ultimate Astro has the ability of flight and energy manipulation like his devolved form however he now can drain energy from other beings as well as perform some powerful moves. Ultimate Astro can now charge up and release a massive energy blast that sends his opponents flying which also drains their energy slightly enough to knock them unconsious if they were weakened by the blast enough. He can also fire balls of energy that have powerful impacts and beams of energy from his arms. As seen in Isolation, Ultimate Astro has the ability to travel through energy transmiters, allowing him to travel into the interior of a facility.

As opposed to being made completely of energy and being exposed to gain more power, Ultimate Astro can be absorbed and used as an energy source.

In The Hungry Alien, Ultimate Astro attempts to fend off The Vorzzle.

In Isolation, Ultimate Astro defends the team from an alien creature. 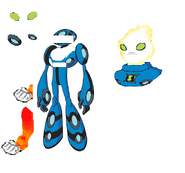 The Making of Ultimate Astro