Ultimate Agilmur is an evolved transformation in Brandon 10.

Ultimate Agilmur is an orange, animalistic humanoid with pointy ears, a pushed in nose, two teeth sticking out upwards and a tail with black rings around it. He has two black stripes connect on his back which end at his chest and at his tail from the other end. His fur curls around his stomach in a similar manner as his devolved form. His hands and feet are bigger than an average foot compared to him and the spiked Ultimatrix symbol is on his chest.

Ultimate Agilmur has high agility and a super grip just like devolved form but he now has enhanced leaping abilities and a sonic howl which can sabotage technology and stun enemies. He is also bigger and stronger and has the ability to pick up and even throw objects.

He has no known weaknesses at the moment.

In The Spy Who Evolved Me, Ultimate Agilmur fought against Sean Myers' Henchmen. 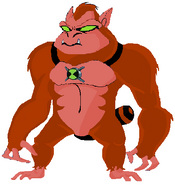 The Making of Ultimate Agilmur Part 1

The Making of Ultimate Agilmur Part 2

Ultimate Agilmur Trading Card
Add an image to this gallery
Retrieved from "https://ben10fanfiction.fandom.com/wiki/Ultimate_Agilmur?oldid=798935"
Community content is available under CC-BY-SA unless otherwise noted.