Tropiguana is the Omnitrix's DNA sample of a Floral Manzardill from the planet X'Nelli. He is a free use alien.

Tropiguana appears like a typical Manzardill, but with green skin and white eyes. His body is overgrown with wildflowers and foliage.

Tropiguana possesses the ability to charge energy directly from the sun to boost himself, making him stronger and more durable.

If he charges enough solar energy, he can expel it from either his mouth or eyes in a concentrated beam attack.

Tropiguana possesses dominion over plant life, able to manipulate the growth and functions of plant life to his bidding.

On top of these powers, he possesses the standard Manzardill abilities of water breathing and wall climbing.

Tropiguana is vulnerable to being frozen, which can cause him to fall into hibernation.

Tropiguana requires direct contact with sunlight to fuel his powers. His Solar attacks require charge to use, but his chlorokinesis can still be used without (albeit weaker).

Tropiguana is very slow moving, weighed down by the plant life growing on him.

Tropiguana is a free use alien, feel free to use him in your own series. 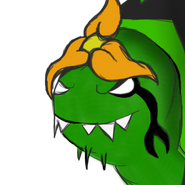