Grimstone is the Omnitrix's DNA sample of a Necroterran from the planet Anur Vladias in the Anur System in Earth-1010.

Grimstone has a vaguely humanoid body, with rock-coloured skin. He has a large triangle-like head with two green eyes. His body is covered in small holes. His hands have three fingers, and his feet have three toes. He also has a small tail, and the Omnitrix symbol is on his stomach.

The only power that Ben has discovered so far is this alien's ability to absorb life force- specifically mana. He likened this to breathing in naturally.

Grimstone has demonstrated no weaknesses so far, save for Ben's hesitation to use him as shown in In The Shadow Of Vilgax.

Grimstone technically first appeared in Death of Ben 10 as part of the fusion Charmedge. Although Ben 10'000 knew what aliens he had fused together he refused to tell the others.

Grimstone was first used in Burning Bridges. The Blacksmith tricked Ben into absorbing Gwen's life force, distracting him for long enough to make a run for it. By In The Shadow Of Vilgax, Ben has decided that the alien is too dangerous to use. 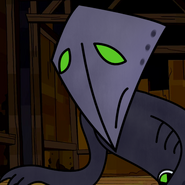 Grimstone in Burning Bridges
Add an image to this gallery

Retrieved from "https://ben10fanfiction.fandom.com/wiki/Triedge_(Earth-1010)?oldid=872181"
Community content is available under CC-BY-SA unless otherwise noted.