Transylians are a race of human-like beings capable of harnessing electricity. Transylians are from the planet Anur Transyl, a high-tech planet full of gadgets. The planet is part of a system called the Anur System.

It is a planet with almost constant vast electrical storms. Anur Transyl used to be home to two different races, the human-like Transylians and the vampire-like Vladats. Transylians were the Vladats' main source of food, feeding on their life energy. But the Transylians rebelled against the Vladats, and by using superior technology that they had developed in secret, they hunted all Vladats on Anur Transyl into extinction and became the dominant species on the planet.

They have become walking electricity/life force generators capable of shooting electricity, manipulating electromagnetic fields, and healing others. Some Transylian bodies are so far augmented that they can survive in the space without any kind of protection, as their muscular bodies, metallic parts, electromagnetic fields, and the Lifestone protects them from the cold, lack of air, and pressure. They can even "mix" and “interface” themselves with machines and then control them. For these reasons, most of the Transylians look in many ways like the fictional Frankenstein's monster from Earth fiction. It is possible the author of Frankenstein, Mary Shelly, saw a Transylian and in this universe was inspired to write her book from seeing it. In the real world, her book inspired Transylian creation.

The Transylians are introduced in the shocking ending of The Black Knight. They are explained to be a normal human like species who did defeat the Vladats. However, at this time they have not become mutated. This may be explained in the crossover movie, Heroes. 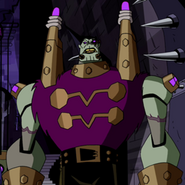 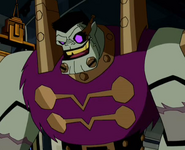