Tomahawk is the Infinity's DNA sample of an Aggrifauna from the planet Fo'well in Bryce Bowman: Origins.

Tomahawk resembles a combination of a rooster and a hawk.

He has sharp claws on his toes and talons on his hands, as well as two larger talons protruding from his arms.

He has a short beak.

Tomahawk is covered in both black and purple feathers and also has a white mohawk.

Tomahawk wears a black mask with lenses that help his very sharp eyes focus on closer up targets.

The Infinity rests on the left side of his chest, on a black sash that only appears when the Infinity does.

Black feathers sprout from Bryce's arm while the Infinity's bright glow deepens. We track the feathers as the begin growing out of his back and then his other arm. Bryce flexes his fingers for a brief second before the fuse together into two fingers and a thumb, covered in yellow scales. A sharp blade slices through his forearm and he closes his fist. Bryce's face morphs with green light into Tomahawk's face. He punches twice with each fist, then kicks the air and poses with his leg still extended.

In The Girl of His Dreams, the Infinity chose Tomahawk after Diamondhead was taken out by Sunder. He quickly beat him.

In Her Hero, Tomahawk fights Sunder for a little bit to defend Marissa before switching to Darkflame.

In Kevin 11 (BBO), Tomahawk fought Sixsix and Vulkanus for a little while, until Kevin stepped in to help.

In Secrets: Part 1, Tomahawk failed to defeat the Alliance and was taken to Vilgax.

In Price of Fame, Tomahawk fought and defeated Sunder.

In Frankenstein's Experiment, Tomahawk replaced Feedback in a fight against Esoterica.

In Monster of the Earth, Tomahawk fought Nemevoc as Equinox, before switching to Wolfsbane.

In Back With a Vengeance (BBO), Tomahawk tried to fight Vilgax and Kevin while keeping Gwen safe but failed.

In Nemesis Returns, Tomahawk fought a Techadon and was not winning, so he changed to Spit Ball.

Tomahawk has retractable talons from his fingers, and scythe-like blades from his elbows. He can cut objects by using the sharp blades on his arms.

He also has enhanced strength, durability, agility and reflexes.

Tomahawk is recognized by Bryce as his best close-range fighter, fighting almost exclusively with its legs, which have surprising flexibility and dexterity as he is able to reach out and grab objects much like an arm. His kicks can generate powerful shockwaves which sends his enemies flying. He is able to kick an object with enough force equivalent to a cannonball. Tomahawk can run very quickly.

Tomahawk is capable of withstanding the vacuum of space, but he still needs to breathe to survive. Without an oxygen-supply, Tomahawk is limited to holding his breath.

Tomahawk's three-claws and talons are able to work simple movements such as grabbing, holding and pulling the trigger of a blaster, but they are not suited for fine-manipulation, as he is unable to work a cellphone. 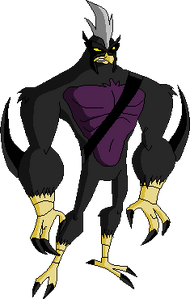 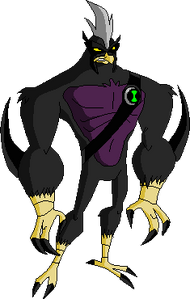 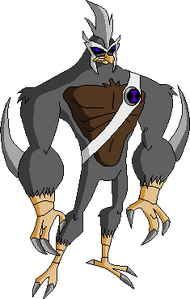