To Dimension X We Go!

Ben has to rescue Jen, Ben 7, and Ben 23 from an alternate and evil version of him, called Ben X. Can Ben defeat this alternate version, or will Ben X's transformations be too much for him?

The episode starts out with Ben playing Sumo Slammers in his room. Tetrax (Dimension 23) teleports in, standing in front of the TV, messing Ben up.

Ben: Huh, I thought I teleported him back to Dimension 23.

Tetrax 23: Can your Omnitrix find out where he is?

Ben: Ok, that's weird I thought I teleported them back to their own dimensions as Clockwork.

Tetrax 23: Can you rescue them? I hear that Dimension X is run by an alternate Ben Tennyson. That Ben is very powerful.

The scene then shows Clockwork creating a portal and then entering it. Clockwork is then teleported to a dimension that is all dark and has mainly the colors purple, red, and black.

Clockwork: Omnitrix, what dimension is this?

Omnitrix: You are now in Dimension X, home of Ben Tennyson from Dimension X.

Clockwork: What is this Ben, uh, Ben X like?

Clockwork transforms back to Ben

Ben: loos at the Omnitrix MK10 Well, I'll be ready for him!

walks over to someone else

walks to a Mr. Smoothy waiter

Person 3: Did you lose your memory, you are him!

A 4th person, who looks a little like Kevin, sitting at Mr. Smoothy's overhears Ben

Person 4 (Kevin XI): whispering Hey, did you say you're looking for Ben X?

Ben: Yeah, wait Kevin, is that you?

Kevin XI: Yeah, well, actually it's me from this dimension.

Kevin XI: Was. Now I battle him to save the people of this dimension, along with Gwen and Argit. To bad he sent them far away into space. Haven't seen them since.

Ben: What about Azmuth?

Ben: Who else is on his side.

Kevin XI: Um, Psyphon, Vilgax, Hex, Charmcaster, and Vulkanus, along with many others.

Ben: So will you help me find him?

Ben: So some alternate Omnitrix wielders helped me defeat my Albedo and then, when I was Clockwork, teleported them to this dimension by mistake.

Voice: Did some one say backup.

Ben: Albedo! quickly tries to transform but is stopped by Kevin

Kevin XI: Oops, did I forget to mention that Albedo is a good guy now?

Albedo: Uh yeah. He could have transformed into a To'Kustar and accidentally stepped on all of us!

Ben: Sorry Albedo, just in my dimension Albedo is a bad guy.

Albedo: It's okay, I was formerly a bad guy too, until Ben X became a mutant. Now I have to protect the citizens of the universe since it was my fault.

Ben: So, can you help Kevin and me defeat him?

Albedo: looks at Ultimatrix, then at Ben Of course. I want to defeat Ben X once and for all!

Petrosapien: Alright, so you must be alternate versions of me. Well, now I'll be superior!

Ben 23: looks at his Hero Watch Well maybe Mr. Monkey will defeat you. hits his watch and transforms into Speedyquick

Tetramand: You know you can't escape me!

Speedyquick manages to get out of the cage and run away

Tetramand: looks at the two others Ah, he wouldn't have been a good fighter, he would just run away anyway.

The scene is back to Ben, Albedo, and Kevin XI at Mr. Smoothy's

Ben 23: Yeah, thanks for teleporting me here.

Ben: It was an accident. At least I came back to save you. here's Ben and Jen?

Ben 23: An alternate version of us called Ben X is planning to brainwash them right now.

Albedo: So that is what he is planning to do!

Ben 23: Albedo! looks at his Omnnitrix

Ben: No, this is the Albedo from his dimension. He is on our side Ben 23.

Albedo: Yeah, and then someday an evil Ben will still attempt to fight me, because I'm good. Anyway, it's ok.

Kevin: Of course we are.

Kevin XI: Albedo and I already know, so I think I should lead.

Ben: Yeah, I'd rather follow Kevin then Ben 23. No offense.

Ben, Ben 23, Kevin XI, and Albedo walk to a building, which turns out to be Ben X's headquarters

Ben: Ok. looks at Omnitrix and transforms into Chromastone Chromastone! Huh, haven't used this guy since the last time I saved the world.

Albedo: hits the Ultimtrix, transforming him into Diamondhead Why do you shout your alien's names?

Chromastone: It's to strike fear in my opponents.

Diamondhead: Huh, I got to try that. Diamondhead!

Diamondhead slices through the door and Kevin XI, Diamondhead, Chromastone, and Ben 23 walk in

Ben X: Well, well, well. If it isn't my good counterparts and Albedo and Kevin XI transforms into a Pyronite Well you can't defeat me.

Diamondhead: You aren't going to win this time Ben X.

Pyronite: transforms into a Kincerelean You can't defeat me that easily!

The scene switches to Freezelizardand Chromastone. Cromastone then hits his Omnitrix and transforms into a yellow rocky creature who is about 7ft. tall

Rocks: Whose this guy?

Freezelizard: You're Mr. Indestructible. You can manipulate earthquakes and can control the earth. You have geokinesis and if enough power, you can move tectonic plates!

Rocks: Yeah, I'm not naming him that. How about Rocks!

Rocks then punches the cage that holds Ben 7 and Jen in, and it breaks

The scene switches back to Kevin XI and Ultimate Humungousaur fighting Ben X as a Kincerelean.

Ultimate Humungousaur: Yes I can.

Vaxasuarian: You so sure? grows to 60ft tall Now who will win!

Ben X punches Ultimate Humungousaur, which transforms him back to Albedo

Albedo: No, how could I lose.

Voice: Because of me.

The person walks closer, revealing to be Sunny of this dimension

Kevin XI: So you're the one who's ben helping Ben X.

Ben: No, not now Omnitrix.

Sunny: snaps her finger and Jen and Ben 7 disappear That I can send you back to your own dimension.

Ben: looks at Omnitrix Come on Omnitrix, give me something good. hits his Omnitrix

Ben is engulfed in a green light. His arms turn into tentacles. His torso then starts to disappear and then his legs morph into one. His legs then morph into four tentacles next to his two arm tentacles. His brain is then exposed in a dome as his head. When the transformation is complete, there stands Ventrilosquid

Ventrilosquid: You will help me defeat Ben X.

Sunny: I will help you defeat Ben X.

Ben X: You can't defeat me. hits Sunny, knocking her against a wall and out cold

Ben X getting hit by the Sonic Doom Ahhhhh!! transforms back to Ben X, knocking him out

Ultimate Echo Echo and Ventrilosquid transform back into Albedo and Ben

Albedo: Thanks for helping me defeat Ben X, Ben.

Ben: No problem. transforms into Clockwork Come on Ben 23, time to go.

Freezelizard: transforms back into Ben 23 Maybe you should come with me this time.

Clockwork: transforms back into Ben Yep. 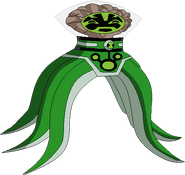 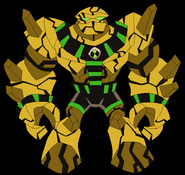 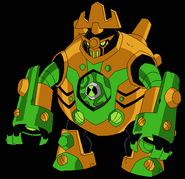