Ben 10 Fan Fiction Wiki
Register
Don't have an account?
Sign In
Advertisement
in: UltiVerse, Aliens, Ben 10: Protector of the Omniverse,
and 19 more

Timbrewolf, formerly known as Benwolf, is the Infinimatrix's DNA sample of an Loboan, from Anur Transyl's moon, Luna Lobo in the Anur System in Ben 10: Protector of the Omniverse. He is the Timeline 1 equivalent of the canon Blitzwolfer.

Timbrewolf has Blitzwolfer's original series appearance, but his fur is dark grey, and the white parts on his outfit are green. The Infinimatrix symbol is on his chest and is recolored black and green. His colors match the color palette of Heroes United.

Ben hovers in a dark green background, with light green bubbles pulsating rapidly behind him, as he crouches down, assuming a quadrupedal stance. He opens his mouth in pain, the inside colored green, as he gains several small, serrated teeth, with the ears and the muzzle elongating until splitting into four parts, then closing again. His musculurate increases on his upper body, with blade-like bones emerging from his elbows. His fingers merge into three sharp, black claws and the bones on his lower leg snap and rearrange, with the feet splitting into two black claws, with one extension in the heel. He is covered from head to toe in smooth, black fur, with a thick mane running down the back of his neck. A long tail emerges from the end of his spine, as a green bodysuit with a black trim surrounds him. Timbrewolf opens his glowing green eyes and the Infinimatrix symbol pops out of his chest. He stands up in a bipedal stance, splits his muzzle and unleashes a sonic howl, completing the transformation.

Timbrewolf can emit a powerful green ultrasonic howl by opening his quadra-hinged muzzle that can either reflect incoming projectiles or propel himself upward like a rocket booster. His sonic howls are powerful enough to damage Petrosapiens. They also exceed the screaming capabilities of Sonorosians.

Timbrewolf has enhanced senses of smelling and hearing, giving him great tracking and detection abilities.

Timbrewolf has enhanced agility and reflexes. He also possesses enhanced speed and stamina.

Much like an ordinary wolf, Timbrewolf has sharp fangs and formidable claws. He also has extraordinary night vision.

Similar to Wildmutt and Kickin Hawk the claws on Timbrewolf's feet are prehensile.

Like all Anur System aliens, Timbrewolf is immune to the effects of Corrodium.

In addition to his feet, Timbrewolf's tail is also prehensile, and he can use it to suppress fire.

Similar to most Earth canines, Timbrewolf has sensitive hearing. Therefore, he cannot handle loud noises like that of giant bells or sonic howls of other Loboans.

Timbrewolf can't use his sonic howl if his muzzle is forced shut by something, such as Thep Khufan's bandages or a Plumber-specialized mouth cover. 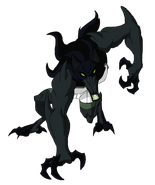