Start a Wiki
Tick is an alien transformation in Brandon 10.

In Alien Force, Tick resembles a small insect similar to a cockroach. He has antennas and his green eyes are in a black hole in his body where, seemingly, his head is but remains unseen. The Omnitrix is on his chest barely seen from the front view.

In Ultimate Hero, Tick's appearance does not change majorly from his Alien Force appearance. The Ultimatrix symbol is on his chest.

Being as small as a bug, Tick can fit in very small places such as under doors. He can also climb walls and ceilings.

As first seen in Conquest of the Conqueror Part 2, Tick can fire small and powerful, green, energy lasers from his antennas. It can be charged up to create a slightly larger blast. He also has an enhanced exoskeleton which protects him from some attacks as seen in Seeking the Truth.

Tick is exposed to many dangers due to his size such as large animals and objects. 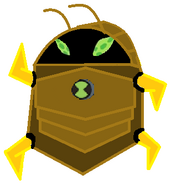 Tick in a Standing Pose

Tick in the Alien Force Titles

Tick in Nightmare on Alien Street
Add an image to this gallery
Retrieved from "https://ben10fanfiction.fandom.com/wiki/Tick?oldid=866736"
Community content is available under CC-BY-SA unless otherwise noted.