Thep Khufans are sentient beings in this Milky Way Galaxy. They are in a system called the Anur System, a dark system inhabitated by ghosts and other horror movie-like beings.

Thep Khufans are mummy-like creatures composed entirely of bandages (similar to bandages used to preserve mummies in ancient Egypt). They are composed of thin, humanoid shapes with slight ape-like features on their limbs. Their shell-like heads resemble headpieces from ancient pharaohs, minus the nose and mouth. They have "skirts" on their waist, and 2 bandages dangling from their upper back. Their bodies are hollow, meaning they can store things in their chest. In their bandages are gaps on their wrists, chest, and ankles, as well as their eyes, that glow a color (normally seen dark purple). 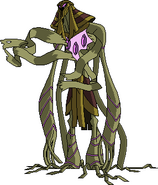 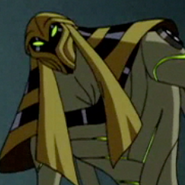 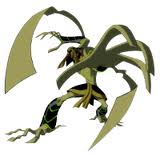