The Wolf is a Loboan from Anur Transyl's moon Luna Lobo in Bryce Bowman: Origins.

The wolf's appearance is based on a werewolf. He has grey fur, a long flowing mane, and a large bushy tail, with three sharp claws on each hand and foot.

The inside of his mouth is pink.

His eyes are a bright purple.

His origin is unknown.

His goal was to release Zs'Skayr from the Infinity.

The wolf first appeared in Midnight Prowl when he stole some computer and satellite equipment. He retreated before Bryce had a chance to defeat him.

In Darkness in the Air, the wolf was defeated by Psychophagus.

The wolf can emit a powerful purple ultrasonic howl by opening it's quadra- hinged muzzle.

The wolf has enhanced senses of smelling and hearing, as well as enhanced agility, speed, and strength. 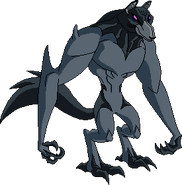 The Wolf
Add an image to this gallery

Retrieved from "https://ben10fanfiction.fandom.com/wiki/The_Wolf_(Earth-90)?oldid=881969"
Community content is available under CC-BY-SA unless otherwise noted.