Start a Wiki
The Terminus; The Start is the epilogue to Mig X following the canon events of Project Deca. More specifically, it is a lasting farewell to the Mig 10 Franchise.

Hi, it's Migster7 (Mig). Upon ending off my series in a rather tragic way with literally everyone dying except that spiky asshole, I learned that I wasn't exactly content. I had squeezed in so much content into just one, final movie and it came across as sudden, rushed, and just flat out awkward in general. I was not happy. I almost wanted to rewrite the entire thing because of how dissatisfied I was with it after the fact. The ending with Gamma being introduced and ending up destroying the universe was always a thing I had planned - everything else, well, not really.

He approached me and asked if I would be okay with Terox appearing in the series. I agreed, and was very curious where he was going with it. While reading through his series, it made me ecstatic to see my own character have such a powerful presence even though I was totally blind to everything going on. When he asked if Mig could appear, and I read his return, I don't even know how to describe how I felt. Knowingly or not, CaT fixed everything I took issue with in my ending, and gave it the ending I wished I'd given my series. I thought the ending was perfect, especially Terox's final moment. It literally made me emotional to read.

However, it felt wrong for me to say goodbye without doing a little something myself on top of it all. That's where this short little epilogue comes into play. I just felt like I had to do something, one last time.

The day I'm releasing this - December 3rd, 2019 - is also a special day for me. It's the day I joined this wiki, 8 years ago, despite what date my signature says. I never understood whatever the hell Wikia's time is set to. Anyway, I felt like this was a nice way to book end my writing "career" on this wiki. So, I hope whoever is reading this enjoys.

And also, I wanted to say thank you everyone who's supported me, supported my characters, and maybe (possibly?) liked my content. Have a good one!

There was nothing but darkness everywhere. He felt himself lying down on a hard surface, but he wasn't sure.

Still, there was nothing but darkness. Compared to that beautiful sunrise, this was extremely disconcerting.

He wasn't really...anywhere in particular. Perhaps his own mind? He didn't know. Nothing made sense.

His eyes frantically looked around to find the source of the voice. He needed to know.

Mig turned his head around, seeing a figure standing behind him.

Mig pulled himself up.

"That's one way to put it," he responded dryly.

Gamma sighed, rubbing the back of his neck. He observed the ominous darkness that enveloped them. He then turned towards Mig, meeting his gaze.

"Know where we are?"

"Ah," Mig said. "Now it makes sense. This is your plane of reality, right?"

"The Carina," Gamma remarked. "Or what was, I suppose."

Gamma stopped and looked around, spotting nothing besides Mig and the ever-present darkness.

Gamma let out a dry chuckle, and crossed his arms.

Mig narrowed his eyes and glanced down, beginning to form a grin.

"It sure did take a while," he joked. "I'd completely forgotten what happiness felt like, to be honest."

The two stood in silence for a bit. Mig then looked back up at Gamma.

"Yes," he responded neutrally. "I'm sure you're aware of the consequences?"

"And you're okay with it?" Gamma questioned.

"There's nothing I've never been so sure of before," Mig said, quietly. "My time is over."

"Dying does that to people," Mig tsked.

"I was dead, too. Taking in all that remaining Gamma Energy coupled with what little remnants you had left in you is what brought me here, I suppose."

"I guess I shouldn't be surprised," Mig sighed. "Why am I here, anyway?"

"When you restored the universe, it restored the Carina. Your connection to Gamma Energy brought you here, and since you're dying, call it...uh..."

Gamma eyed Mig for a moment, and the two fell silent again.

"You know, Mig," Gamma began. "When I came into existence, I didn't know how to make sense of this crazy world. I was painfully curious. That's what Gamma Energy was. My attempt at trying to grasp it all, trying to find a way to understand."

"The universe was a big, unknown variable that I couldn't solve for. I kept trying to find the answer, but it wasn't possible. Until I felt you tugging."

"You tugged and tugged until I lost all my balance. That was the first time I ever felt anything before. It scared me, I must say. But...despite the fear, despite the confusion, I knew that there was a reason for it."

Gamma placed his decaying hands on his shoulders.

"You were the unknown variable, Mig. You were X."

Mig looked down at his hands instinctively.

He looked Mig dead in the eyes.

He let go of his shoulders and slid his hands into his pockets, backing up.

"You failed over and over. You even died, yet that still didn't stop you, did it? There we were, at the terminus. But that terminus wasn't the terminus, was it?"

A white light suddenly began to bleed over the darkness around them.

"Tell me. How does it feel to be the start?"

Mig noticed the light expanding all over, and felt himself being pulled by an unknown force.

"The start of something new," Gamma clarified.

Mig looked upwards at the light. He paused for a moment.

He shook his head.

"That's something I simply cannot answer."

In the light, Mig witnessed Dirty Sanchez and Furtim Vernon running on the street, as Flint Maxis was giving chase. Furtim camouflaged and ran into an alleyway, laughing as Dirty was exposed. Dirty rolled his eyes in frustration.

"Beginnings aren't our tales to tell. All we can do is bare witness to the start of something."

He then saw Trinity Michaels and Wayne Rogers holding hands and walking on the sidewalk together. Shiar Shreen approached them from behind, scaring them. They all laughed.

"Everyone is a start to something new."

He saw his father Ryan Rivers and his mother Virginia Rivers. They were walking in the park together, smiling.

"And only they can answer how it all started."

Lastly, Mig watched Daniel Rivers as he sat on the park bench and looked up at the cloudless sky.

He turned around and started to walk off, his body vanishing even more. Mig looked away from the light and saw Gamma departing.

Gamma stopped and turned back to face Mig one final time.

"This universe will be alright."

Distant voices began to occupy the brightening space around Mig.

"Now, can you tell me more about the 'Gammatrix' and how you know about it?" - Miguel Tennyson in The Start of Something New Pt.2; Mig 10

"Alright then, this'll be fun." - Miguel Tenison in Beginnings: Part II; The Legend of Mig

"What am I supposed to do? I have no idea how to be a 'hero.'" - Miguel Rivers in How It All Started; Mig X

With tears welling up in his eyes, Mig smiled brightly.

The light spontaneously increased in intensity, covering up all the darkness until it was all there was.

Mig extended his arms outwards to embrace the light as he was being lifted. 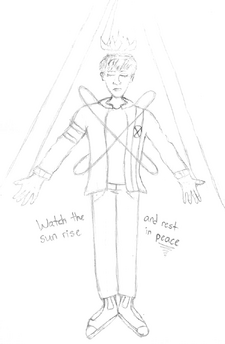 Retrieved from "https://ben10fanfiction.fandom.com/wiki/The_Terminus;_The_Start?oldid=886806"
Community content is available under CC-BY-SA unless otherwise noted.