To be a superior supernatural being

The Sorceress is a villain in Brandon 10.

In The Original Series, The Sorceress resembled a Human Female with long grey hair, red eyes and purple lips. She wore a purple cloak and darker purple leggings. She also carried a small bag wrapped around her waist but put to the side.

In Alien Force, The Sorceress looks younger and more teenage. Her grey hair looks straighter and her eyes are now dark close to black instead of red. Her lips are also a dark tone similar to black and her nails are purple. Instead of tying her hair, There is a sort of crown with horns on her head. Instead of a long purple cloak, She wears a purple outfit with a red emerald on the front. Black lines outline the emerald and several sections of her outfit.

In Ultimate Hero, The Sorceress' appearance has not changed majorly from her Alien Force appearance.

In The Original Series, The Sorceress had the ability to manipulate objects into her minions and enchant various spells for different purposes such as offense, defense, transport, flight and etc.

In Alien Force, she still uses the same powers but her abilities are more advanced. She can now disguise herself as other beings temporally and hypnotize other beings to do her bidding. As seen in Enchanted, she uses a magic sphere to see what is happening in other places although this isn't used as often as it requires a fortress or base but mainly mobility.

In Ultimate Hero, The Sorceress still has her same abilities however she is more advanced in the works of magic. Being younger, she has quicker reflexes than an older magician. She also learned "Voodoo" or Mind Control Spells as seen in Easy Magic.

The Sorceress' goal is to be a more superior supernatural being and to use her powers to dominate worlds and have them under her control.

The Sorceress in Beginner's Luck 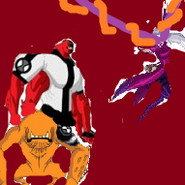 The Sorceress in Switched

The Sorceress in Easy Magic
Community content is available under CC-BY-SA unless otherwise noted.
Advertisement