The Rhino is a mutated Human from Earth, Dimension 616, in Bryce Bowman: Devil's Bounty.

Rhino is a tall humanoid with grey, kevlar-like skin, three-toed feet, and two large horns on his forehead.

Rhino used to be a regular human, but he was captured and experimented on by a mad scientist, combining his DNA with that of a rhinoceros, giving him his powers.

He doesn't have a particular goal, he generally just shows up when he's set off or startled by something, and ends up escaping custody.

The Rhino first appeared in The Avengers. He was thrashing the street after something set him off until Spider-Man attempted to calm him down. He was successful until the Omnitrix's Danger Early-Warning system malfunctioned and set off an alert, for seemingly no reason, which sent him spiralling.

Rhino is timid, and frightened by a lot, but especially loud noises and bright lights, as he was set off by the Omnitrix's Danger Early-Warning system, which was malfunctioning.

He appears to understand when people are speaking to him, but it's more akin to how a dog might understand humans. Meaning, he understands the tone of voice and the actions more than the actual words being said.

When he is startled, he becomes incredibly angry. He turns into an unstoppable monster.

The Rhino is incredibly strong, enough to take on Rath in a fist-fight.

His skin is almost impenetrable all Earthly materials and weapons, very akin to kevlar.

When Rhino picks up speed it is almost impossible to stop him. His momentum builds exponentially with each step, making him truly an unstoppable force. 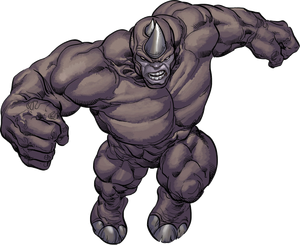